People You Should Know

A few weeks ago I was doing a live painting event in a playground. It was for a good cause and I was able to finish two portraits while listening to some awesome entertainment and meeting some very nice people. I had just started working on a third portrait, when a little boy came up and asked , “Who’s that?”. I was surprised he didn’t know. I kicked into teacher mode and asked him what grade he was in. “Fifth”, he said. Well, I think you should know who Einstein is by 5th grade, at least you should have heard the name before.  I told him a little about Albert and then asked him about the two other  subjects I had painted that day. They were a bit more obscure for a 5th grader, so I cut him some slack.

He seemed satisfied with the three minute synopsis of a Nobel prizewinner, but of course, I had to challenge him. “How about, the next time you have a book report due, a biography, pick one of these people and learn more about them.” He looked at me sideways, surely at the thought of book reports in August, and said “Ok, I’ll do that.” I hope he does. Now, my own children said maybe I was expecting too much, “It’s summer, he’s not thinking about school”, “You know kids don’t remember everything.” , true, but a little sad nonetheless.

As a result of this encounter……I will be posting a portrait each month of people I think we should all know more about.  Maybe you’ll learn something new, maybe you’ll be able to tell me something new, or maybe it will just be a nice picture for you to look at. I kind of hope it’s the first two though, makes it more interesting.

So, here is my first portrait of the very same Albert EInstein and a little info, plus a quote. Please feel free to add any information you know about Albert in the comments box. Share your links about the subject and reblog at will. 🙂 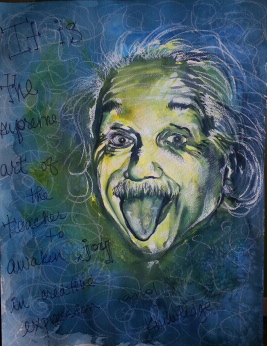 “It is the supreme art of the teacher to awaken joy in creative expression and knowledge.”

DID YOU KNOW?: Einstein was asked to be the president of Israel, but he declined: After Chaim Weizmann, Israel’s first president, died in 1952, the country’s prime minister offered the job to Einstein.

DID YOU KNOW?: Einstein died after refusing surgery, saying, “I want to go when I want. It is tasteless to prolong life artificially. I have done my share, it is time to go. I will do it elegantly.”

27 Aug This entry was published on August 27, 2013 at 1:33 am. It’s filed under artwork and tagged biography, Einstein, know, learn, portrait, question, quote, teach, watercolor. Bookmark the permalink. Follow any comments here with the RSS feed for this post.

Older: today was a good day
Newer: Back in teacher mode