A few weeks ago an acquaintance on Facebook posted a question. She wanted to know if anyone had any ideas for fundraisers. I mentioned that I had recently organized a small fundraiser for my Principal and a friend who were participating in Walk for Strides to benefit breast cancer. I had been offered a small exhibit space at a local restaurant and took the opportunity to sell work and donate a percentage of the proceeds to a worthwhile cause and lovely people. It actually turned out to be a great night and those who attended were generous and I think truly appreciative of the artwork and the cause.

I guess she liked the idea because she contacted me a while later and asked me to participate in her fundraiser for The Women Worldwide Initiative. The fundraiser featured a screening of Miss Representation, a documentary film exploring the portrayal of girls and women in the mainstream media. It was more than that really, and quite eye-opening. She asked that I bring a few pieces that would be available for purchase, with a portion of the proceeds going to her foundation. I was more than happy to be a part of it after all I am a woman, have two daughters and will be way more impressed with this country when a woman is finally elected President. If we do not advocate for ourselves and each other, then who will?

My stumbling block came the night before (I can be a bit of a procrastinator) when I had to choose which pieces to take. The whole idea was to exhibit artwork that would be appealing to the buyer while remaining true to the spirit of the event. The portraits in my “Family of Women” series, which is an ongoing project, was tempting but I always think, who would want a portrait of someone they don’t know?

In the end I settled on a few pieces that I hoped would reflect some of the shared experiences all women have. With that in mind, I chose the following pieces – 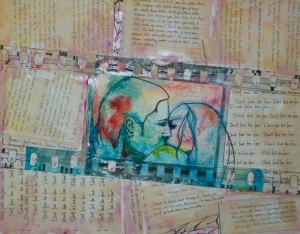 understand that there’s a cost before that first kiss 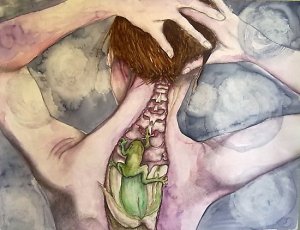 someday my prince will come

It’s always a gamble when you put out work without an explanation. The film itself brought up a few issues that were reflected, or so I thought, in the artwork. The conversation afterward was lively and insightful, the homemade cupcakes were delicious and worth every penny. I learned about the history of the donated space from a current resident and my small, donated oil  study of a nude garnered enough attention in the raffle to raise a few bits for the organization. The winner was happy with her prize and we raised a few extra bucks, that’s what really matters.

I didn’t sell any pieces that night, which was a bit disappointing, not just for myself but for the fundraiser as well, I’m sure. It was also a bit ironic. Here we were, watching a film about the misrepresentation of women,  getting the message that we need to support each other and work toward reversing the reputation that the media and society has labeled us with…..and only one person thought to ask about the artwork, created by one of her own. I’m not saying that they should have been knocking down the antique doors to get to my work, but it’s a shame that art does not create the same demand that a handbag or a pair of shoes does. How much are we ourselves to blame as women for perpetrating those stereotypes?

I kind of got off topic (if I ever had one), but it has made me realize, I’m still just hustling.

The Women Worldwide Initiative  is an organization worthy of your time and money. Find the movie, Miss Representation, think and talk amongst yourselves.

20 Mar This entry was published on March 20, 2014 at 11:14 pm. It’s filed under artwork and tagged art, aubergine, cupcakes, fundraising, Miss Representation, movie, nyc, women, women's rights. Bookmark the permalink. Follow any comments here with the RSS feed for this post.